This book acts as a sort of a weird commentary on the comic-book industry as a whole.

While I’m never going to complain about a book that collects material — I think it should all be collected and available, in some form or another.

A common complaint of this book is how misleading the title “Gambit Classic” really is, because one half of the book.

It reprints a mini-series that did not nominally star Gambit, and the other half reprints a tale that very few would consider being classic.

Unlike the first Gambit Classic volume, which reprinted not only his first mini-series but also important key issues from Uncanny X-Men in which he first appears, this volume strictly reprints two previously-uncollected mini-series that can be made to fit together if you squint real hard, but in reality, are quite far apart storyline-wise.

But strangely this complaint has less merit than you might think and is more a complaint about standards of gender treatment within comic books at the time and even today.

I did the construction at home and with the help of Mrfindfix.com Mastec Gatekeeper Login Guide, otherwise I could hardly find a login guide, I have to thank these people really for the huge help, or I would otherwise end up reading a book on the street.

The Rouge mini-series revolves around plot-threads set up in the first Gambit mini-series, collected in Gambit Classic vol.1.

In it, Rouge touched Gambit’s first wife, Bella-Donna, and accidentally stole a good portion of her personality and memories: specifically those memories regarding Gambit.

This has led, in the time since, to her amorous feelings towards Gambit being mingled with Bella-Donna’s feelings of love, betrayal, hurt, and regret; making it harder and harder for her to discern what she wants of the man and where her true feelings lie.

The plot also involves Cody — the young boy Rouge kissed when her powers activated — and Bella-Donna’s plot to harm him to get her revenge on Rogue for stealing a part of her.

Through all this, Gambit is following across the country, trying to locate and help his paramour.

So as you can see, this does belong in a Gambit Classic volume: it picks up on plot threads firmly planted in the first Gambit mini-series and has important moments in the life of Gambit and his ever-evolving relationship to Rouge… 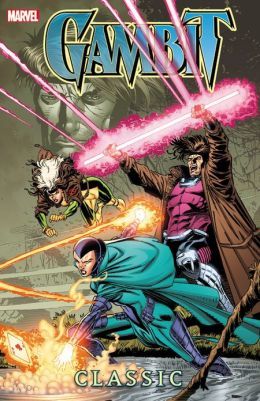 But if that’s the case, why was this called a Rouge mini-series, to begin with?

Was it just to test the market and see which character might sell better if placed in their own title?

I really hope so, because the alternative explanation is less palatable.

The alternate explanation being, of course, is that the writers at Marvel couldn’t see a plot-line for this strong female character that didn’t revolve around the continuing life and evolution of the man in her life.

Even in a title that bears her name, Rouge’s interests and sub-plot take a backseat to those of the main masculine presence.

You can’t have my man!

As I said, I really hope this storyline started as a second Gambit miniseries (which it basically is) and that the name-change on the masthead was largely to test the waters from a marketing standpoint.

That, at least, would be forgivable.

Either way, re-christening it “Gambit” here feels less like a selling-out than an admission that it was that way all along, really.

The second 4 chapters, reprinting the second Gambit mini-series, takes place just slightly further in the X-Men timeline, roughly just before Gambit was exiled from the X-Men after the events of Uncanny X-Men #350.

In this series, after stealing a jeweled cross from a Cuban gangster.

Gambit encounters a literal angel and gets involved in an Omen-Esque struggle between Heaven and Hell, which is strongly implied to actually be Heaven and Hell, and not some crazy mutant with powers and delusions of religious grandeur.

In the end, it turns out Gambit was stealing the cross to the Church as an act of contrition for the sins of his past.

This may have been an attempt to infuse Gambit’s world with a religious angle or perhaps to give him an occult twist to differentiate him from the Mutant Rights plots in X-Men, perhaps to see if this angle would work in a series of his own.

Each one of the X-Men spin-offs has their own ax to grind, and this was possibly a pitch to the fans to see if it would work.

In my opinion, it doesn’t, and I’m likely not alone, as these plots were never mentioned in the Gambit ongoing series once it began.

That’s what makes the “Classic” title so silly: stories the just happen to involve the character but make no effect on his continuing story are not the “classic” tales of that character.